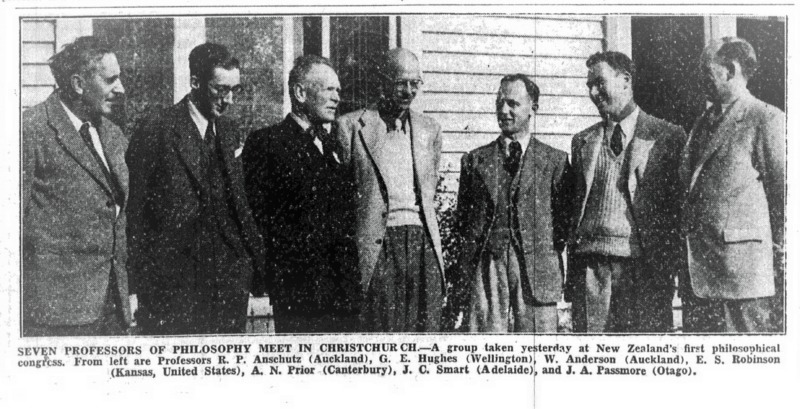 A photograph of the seven professors, including Prior, attending the Philosophy Congress in Christchurch from 22-25 May 1953. It was the first ever philosophy conference held in New Zealand. The conference was international, as several of the speakers were from overseas. Its initiator and organiser was Prior and it took place in the old campus of Canterbury University College in the present Christchurch Art Centre. There were daily reports on the sessions in The Press, all written by Jonathan Bennett, former student of Canterbury University College and at the time philosophy lecturer at the University of Auckland.
The caption under the photograph says:
Seven professors of philosophy in Christchurch - A group taken yesterday at New Zealand's first philosophical congress. From left are Professors R.P. Anschutz (Auckland), G.E. Hughes (Wellington), W. Anderson (Auckland), E.S. Robinson (Kansas, United States), A.N. Prior (Canterbury), J.C. Smart (Adelaide), and J.A. Passmore (Otago).